I started the trip in Oslo, Norway, arriving there at September 4th 2010.

From Oslo airport to the central area we got a train that took around 40 minutes to get to Oslo Sentralstasjon.
We got reservation in the Best Western Karl Johans Hotel, that is in the main street in Oslo, the Karl Johan’s Gate.I always had an image of Oslo as a first world class city, clean, beautiful, safe and comfortable. Well, this is 95% true.
We arrived at the central station around 23:40 and when we left the station, I saw a lot of unfriendly people, drinking, smoking and shouting, some of them, could barely stand up. A hostile place, with people begging.

I saw some women at the bus stop and decided to get some directions with them. As almost every norwegian I met, they were very helpful and kind. I asked if it was safe to walk there at night with so many suitcases, because I as petrified to see that a city that I wanted to meet so much was like that.
One of them said: “Yes, you two together is very safe, here in front of the station things ae scary, but the place you are going, you can go, no problem“.
Well…. we had no choice but to believe in the nice lady.

The Karl Johans Gate is closed for car in its biggest area, just at the end the cars are alowed.

We walked for 5 minutes and still didn’t find the Hotel, meanwhile, some drunk people in the street shouting and enjoying the night. A little bit intimidating, but we kept going untill we find a policeman to ask for directions.

He said that the hotel was two block ahead. When we were leaving, he asked: “Where are you from ?“, then I answered: “We are from Brazil, we just arrived in Norway”. He smiled and said: “Brazil!!! I love Brazil! I went two times there and loved the country! Here in Oslo, the city got too dangerous in the last 10 years, go back to Brazil, there is a better place!”

In this moment I didn’t know if I would cry or laught. The policeman had just destroyed  my child dreams walking in a beautiful city like Oslo.
In 5 minutes we arrived in the hotel and went directly to bed, were exhausted.

Look, I don’t want to show a negative image of Oslo, but this is the image I got in the first night.
Of course that the policeman was too dramatic, after our 4 nights in Oslo, I saw that Oslo is a place MUCH more safe and organized than São Paulo, with a lot of people ready to help you.

Well, on the next day, we started our city tour in Oslo, and I decided to just ignore what that policeman told us on the last night.

Oslo is really beautiful, with a lot of trees and a beautiful architecture.

As I said, Norway is a very expensive country, and Oslo is not an exception, but you can buy the Oslo Pass to make your stay a little less expensive: 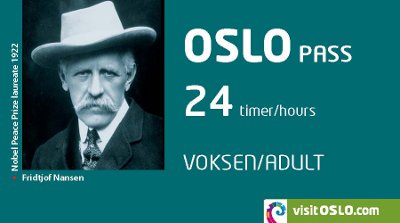 The Oslo Pass will give you discount or free entrane in almost every museum and you can even take public transportation without paying!
You can take the Oslo Pass for 24, 48 or 72 hours. I took the 72 hours ticket

Talking about museums, soon I will make another post talking about the nice museums in Oslo .