Do you know the best beer in the world ???

As I mentioned on the last post, one brewery is in evidence compared with the other trappist breweries.
I’m talking about the Trappist Westvleteren
This abbey produces 3 types of beer: 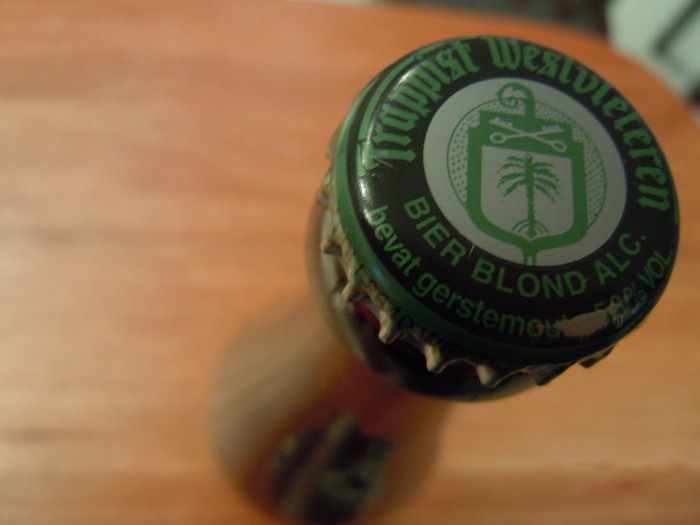 This is the beer consumed by monks themselves. It’s style is Belgian Specialty Ale
It is lighter than the others and it is the only blond beer.
Marvelous, very fruity. 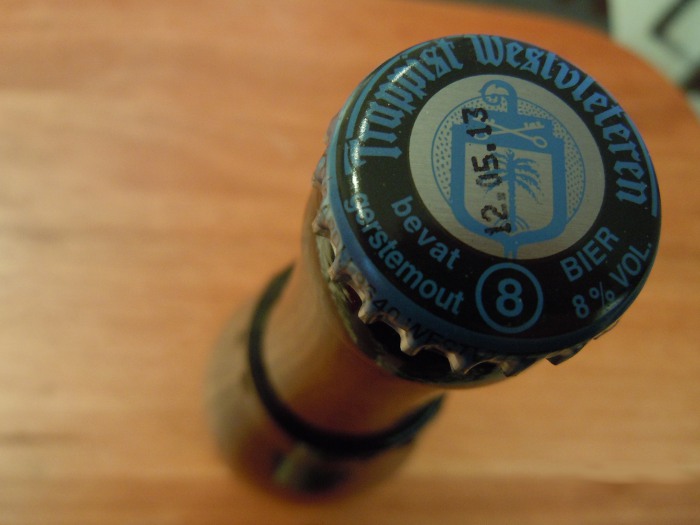 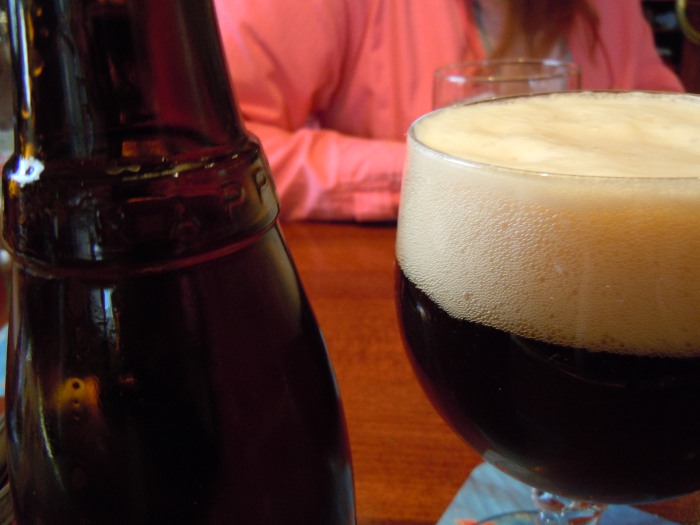 This 8 I had in Brugge, Belgium. Close-up.

This is the intermediate. It’s style is Belgian Dark Strong Ale
This is the first Westvleteren I drank. A very nice beer no doubt. Similar to the Rochefort 8. 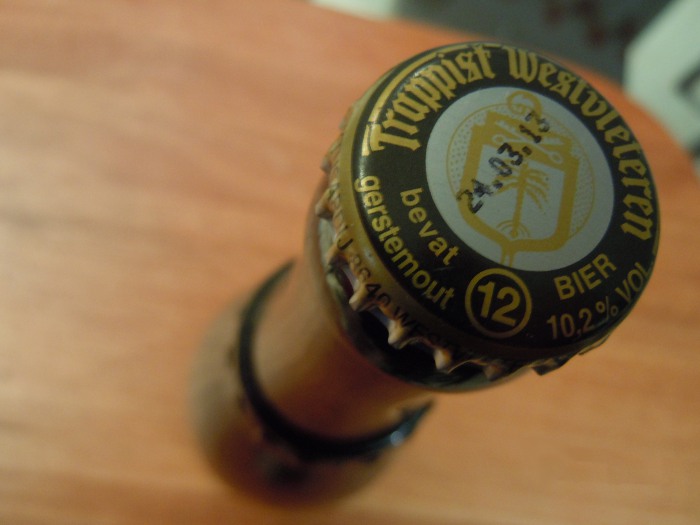 The strongest one. It’s style is Belgian Dark Strong Ale
This one is in first place of beer rankings in the biggest beer sites.

To drink this beer(and any Belgian dark strong beer), you should drink it around 12º Celsius. To get to this temperature, let it in the refrigerator for around 30 minutes.
This way, you can feel all the marvelous aromas that this beer can provide.

Before you ask, I’ll tell you: No, Westvleteren beers don’t have at least a label on it. The only way to identify it is by some details on the bottle and for the cap color.
Take a look at some of the biggest beer rankings in the world:

There is a beer shop em Brugge, it is called 2 Be. It is the biggest beer shop I ever seen, see some pics here.

Beside this store, there is a hall that is known as “Beer Wall”. As they say, there they have all the Belgian beers. I don’t know if there is really all Belgian beers, but there is a lot! Take a look at a video I did there:

A curious thing about Westvleteren monks, is that they don’t like the fact that their beer is considered the best in the world. The problem is that as all others trappist monasteries, the beer is only a way to get funds to their charity activities, and they get mad because most of people go there to take the beer, and not to pray and know the place.

As soon as they opened the new brewery, after the second world war, the monk Father Abbott said: “We are no brewers. We are monks. We brew beer to be able to afford being monks.” – http://www.sintsixtus.be/eng/brouwen.htm

This make it clear that if they had money, they won’t produce the beers.

The first thing I thought when we decided to go to Belgium was: “I NEED to visit the Saint Sixtus abbey”.
I was in Belgium from September 16th until September 20th. One day before I left Brazil, I took a look at their website just to confirm the opening hours of the abbey… and do you know what was written there ?

“We will be closed from September 16th to October 3rd”

My reaction when I read this:

As the abbey would be closed and I had no way to drink it there, I had to go search for it in the black market. Yes, black market, because the monks don’t allow you to re-sell the beer in restaurants, pubs or in any other place.
The only way to buy this beer is directly in the abbey in the city of Westvleteren. And don’t think that you just go there and say: “Hey monk, gimme 50 bottles yo!“.
No sir, if you want to buy it, first you need to go to website’s page, there you will find information about when they will sell the beer you want, as they only brew the beers when they need to raise funds. After this, you call there, make a reservation and they will say which day you should get the beer. Did I say that you only can get the 24 bottle crate ?
If you just want to drink the beer, or buy some kits/glassware, you should go to In De Vrede pub.
This is the only bar allowed to sell Westvleteren beers. it is located beside the abbey.

BUT… it doesn’t mean that people won’t sell it. I found Westvleteren beers in 4 beer shops, two in Brussels and two in Brugge. However, I still had on problem:
It was not so difficult to find the Westvleteren 8 and Blond, but no sign of the so famous Westvleteren 12.

So I was walking in Brussels and saw a beer shop called Beer Planet, and when I got in, guess what was there ??? 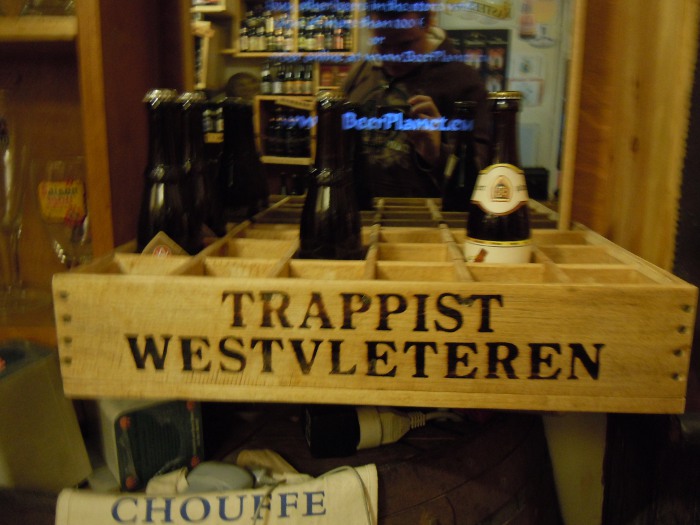 ASAP, I went to the guy who was there and asked how much it was, and he said calmly: “The Westvleteren 12 is not for sale”

Are you kidding me ???  First the abbey was closed, then, the ONLY Westvleteren 12 I found was not for sale ???
Well, it was not for sale, but he said that he would give one “for free” if I spend more than 100 euros. Ohhh my friend…. you said that to the wrong man.
If you are Brazilian and you like this kind of beer, you know that with the equivalent of 100 euros you can’t get a lot of Belgian beers in Brazil… but I was at Belgium my friend… with a little bit more than 100 euros I got one DeuS, Gouden Carolus special edition, a lot of Belgian beers I didn’t know, gueuzes, fruit lambics and even two Gouden Carolus Cuvee Van de Keizer Blauw 2000, plus glasses from Westmalle, Westvleteren, Orval and Gouden Carolus.

After all this “effort”, I finally got my so sought Westvleteren 12, that came extremely packed with bubble wrap to keep it safe.

I drank this beer for the first time last weekend, and I still can feel the caramel taste of it. It is slightly sweet.
This is a very complex beer, very soft and well balanced. The aroma is a perfume, with caramel, toffee and dried fruits aroma.
When you open the bottle, the aroma spread to the air.
Remember that the best way to drink this beer is in it’s proper Westvleteren chalice, and it should be served in around 12º Celsius. 30 minutes in the refrigerator is enough.
Don’t rush, before you drink it, feel the aroma and identify all the complex notes that this beer shows. After a good sensory analysis, take the first sip and delight yourself with the festival of flavors that this beer can provide as few.

Is the Westvleteren 12 really the best beer in the world ?

It is certainly the most exclusive one, and for me, it is one of the bests in the world. Beers like Rochefort 10 and St Bernardus ABT 12 gives you an idea on what to expect for the Westvleteren 12.
I’m sure that the charm of the bottle without label, all the stories, the monks and the rareness of this beer creates an special environment for it, and this is enough to make you look different to this beer.

It doesn’t matter if you are a beer expert or just a beginner in this beer world, it is impossible to be indifferent to this beer after the first sip.

The first Westvleteren we never forget. Drinking a Westvleteren 8 in the marvelous Cambrinus in Brugge – Belgium