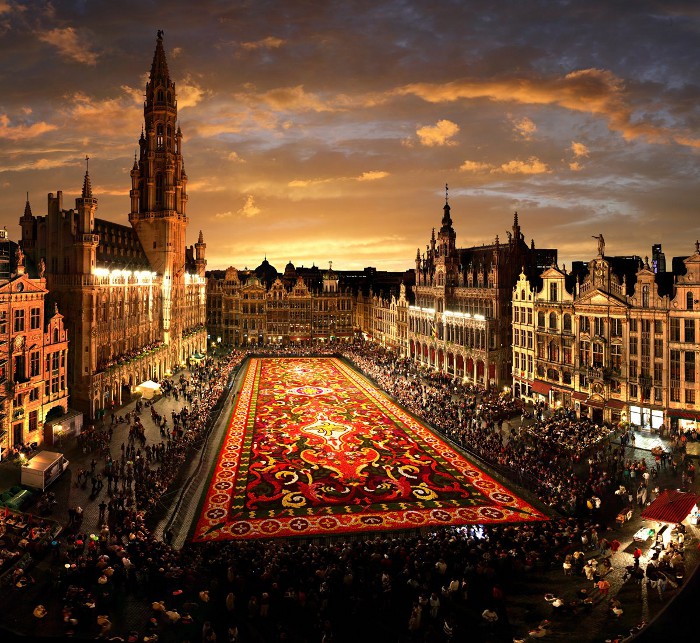 Two words never gone so well as travel and beer when it comes to Belgium.
Thanks to Belgium I named this blog as Travel & Beer.

Of course that as a good beer enthusiast I had plans to visit Belgium, but even before knowing their famous beers I had heard nice things about this country.

In addition of being home to many of the monasteries that brew the trappist beers and the beer that is considered the world’s best beer, Belgium has that traditional European style, showing a country that knew how to combine the modern with the rustic, creating a beautiful nation without losing its roots.

It is a small country with about 11 million people who officially speak 2 languages​​, French in Wallonia (southern part) and the Flemish in Flanders (northern part).
The Wallonian French has some differences from the French of France, mainly in accent, but if you speak French you will have no problem. The Flemish is a close variant of Dutch.
A small part of the country also speaks German.

Belgium has great attractions, but still I was surprised by many things

If you think the best chocolate in the world is the Swiss, you need to go to Belgium my friend. Of course, Swiss chocolates are wonderful, but in my humble opinion, the Belgians are better. 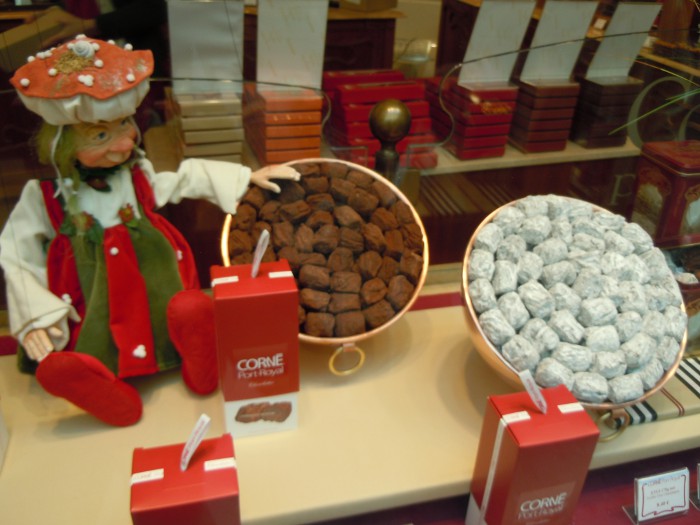 The beloved praline was created in Brussels, at the beginning of 1900, and the Belgian praline means quality worldwide.

The most beautiful girl (Roberta, my wife), in front of the traditional Belgian chocolatier Godiva

No one knows for sure what is the origin of the waffle, but according to studies, it was created in the middle ages in the region that includes Germany, Holland and Belgium.
Regardless of being a creation of the Belgians or not, the Belgians are considered the best when it comes to waffle. I agree with that.
They have a huge variety of toppings and formats, all at a very good price 🙂

The best waffles you can eat, trust me.
Picture taken from Tevan Alexander

You should know that french fries was created in France, right?
WRONG!
The french fries, or frites as it is called, is a Belgian creation. 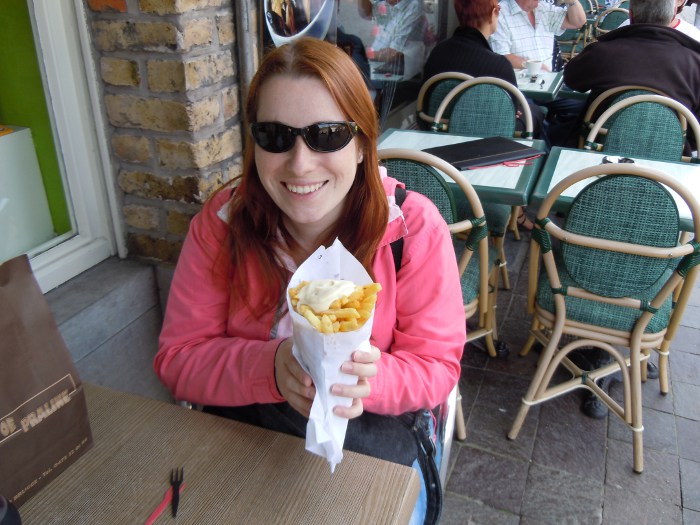 Roberta and the traditional frites cone in Brugge

Do I need to say something about the Belgian beers? Ok, I’ll talk some more.
Unlike many countries that are major producers of beer, Belgium do not treat beer just as a product, beer is part of their culture.

There are things that only happen in Belgium. The video below for example, where a documentary begins by showing that once a year on the first Friday of September, there is a ceremony in the cathedral where they bless a wooden barrel of beer.
This kind of passion with the beer my friends, you will only see in Belgium.

This video is part of the “Beer Amongst the Belgians” from Taylor Brush. He shows the passion and why Belgium has such an affinity for beer.

In my opinion, Belgium makes the world’s best beers. Why? Well, simply because the Belgians have no limit.
You will not find such a large variety of beers anywhere else in the world. 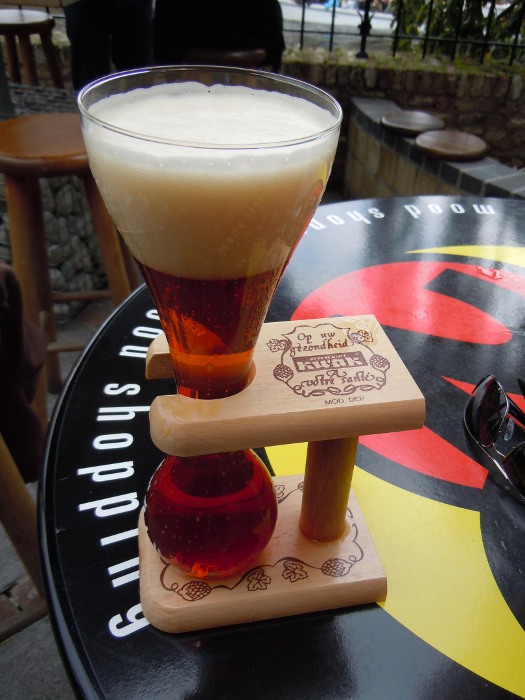 The famous Pauwel Kwak on tap

The Belgians have a very old history of beer production, that was born in medieval monasteries and became famous for full-bodied beers that were used as part of the everyday meal.
The trappist beers are the greatest legacy of beers brewed in monasteries(ok, the Weihenstephan in Germany is also a great example).

Besides the religious heritage, the Belgians brew beer with spontaneous fermentation, beers aged in oak barrels that have a guard time of more than 20 years, fruit beers, beers with spices, beer with champagne yeast and a myriad of other styles.

And I’m not talking just about the beers in itself, the Belgians take seriously the design of the glass(or goblet/chalice, as they like to call it), where every beer is served in its proper glass to make the sensory experience the best as possible.

Brussels is the capital of Belgium and is the only city officially bilingual, speaking French and Flemish, but you’ll probably hear more French than Flemish there.
Brussels is also the official capital of the European Union, being an important milestone in the continent.

Charming restaurants in the outskirts of Grand Place in Brussels

I try not to talk about beer, but in this country is impossible!
In Brussels, is situated the bar with the highest card of beers in the world, the Delirium Cafe. 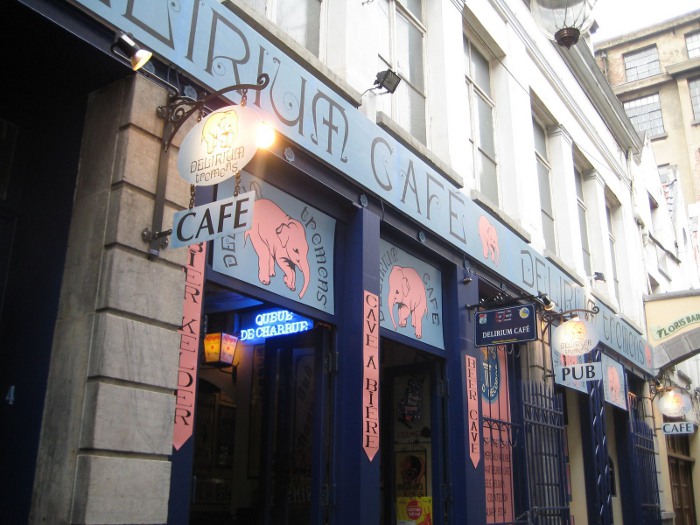 The facade of Delirium Cafe

The Delirium Cafe is listed in the Guinness Book of Records as the bar with more beers in the world, totaling 2,004 beers. 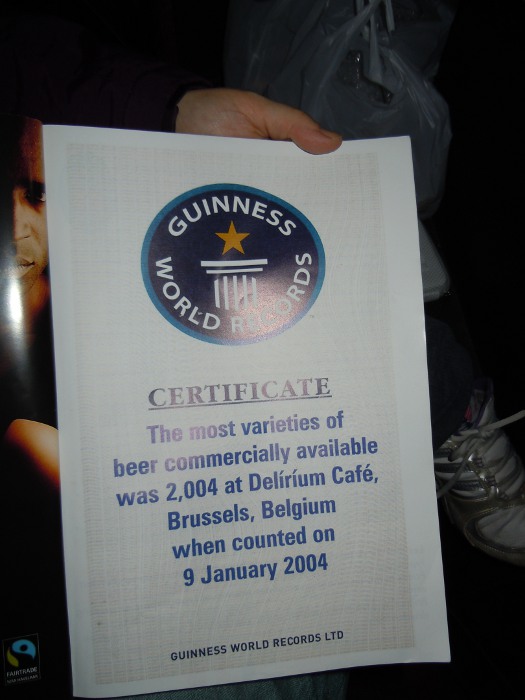 For those unfamiliar, Delirium is a very famous beer brand in Belgium and it is famous for the pink elephant, that is in all material around the brand. 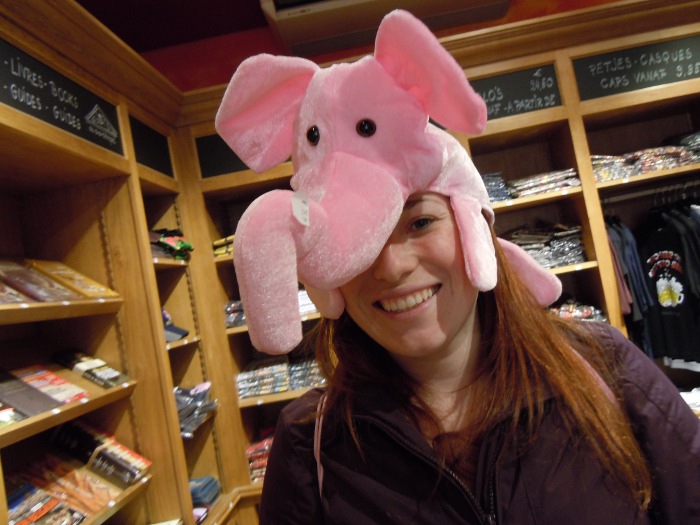 Roberta took seriously the Delirium idea with that hat

The cuisine in Brussels is wide and has a strong French influence, as well as much of Belgium, mainly in Wallonia.
Besides the sweets which I already spoke and the french fries, Belgian cuisine is rich in its diversity and (again I speak about them) harmonization with beer.
It is very common to find dishes made ​​with beer and beer suggestions for pairing each chosen dish, including dessert.

The moules frites are perhaps the most famous dish of Belgium. It is based on mussels with white wine accompanied by french fries. 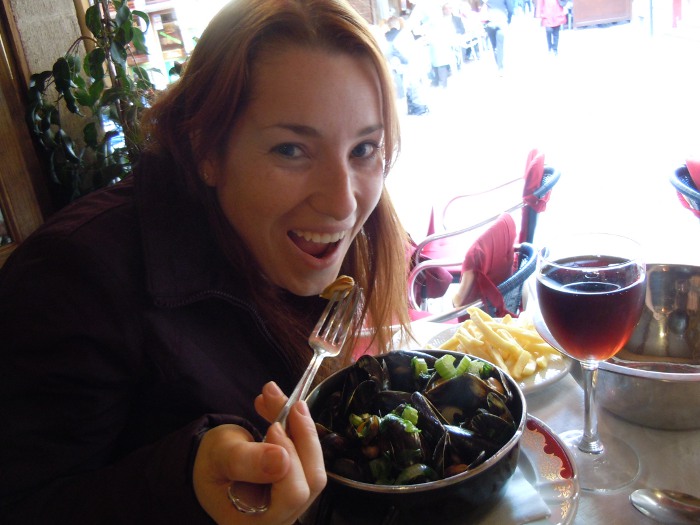 Roberta approved the moules frites(isn’t she the most beautiful one ?)

The most famous sights of Brussels are likely to be: The Grand Place, Manneken Pis and the Atomium. 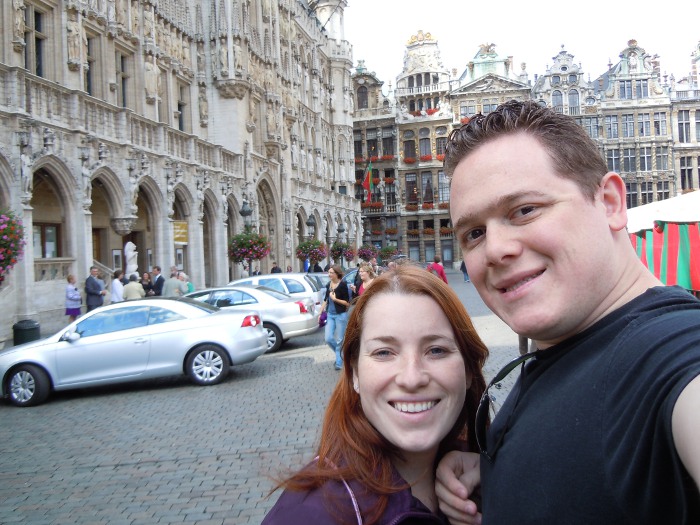 The Manneken Pis is a statue of a boy holding his joystick.
Nothing special, but they always put clothes on him and it became a traditional landmark in the city.
There is a legend that during one of the battles that Belgium faced, a great general was killed in battle. His son who was close, seeing his dead father, in an attitude of contempt he pissed on the dead body of the soldier who killed his father. Because of this, they decided to make a statue that stands today in Brussels.

The famous pee boy(not me, the statue)

I did not get to visit the Atomium, but is also a famous tourist spot. 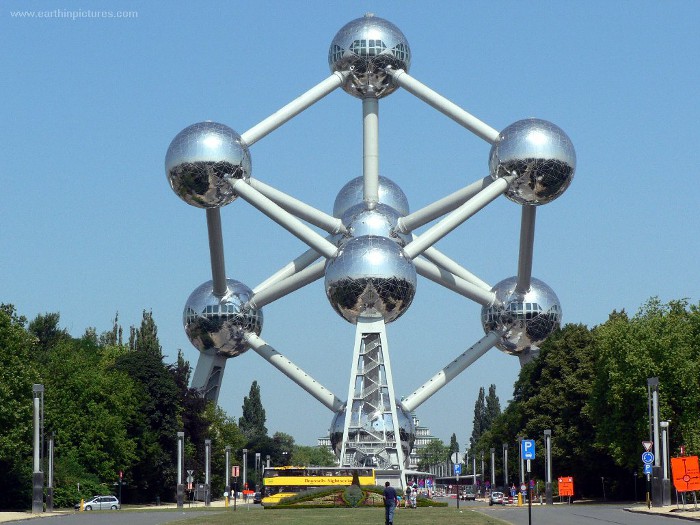 Brussels has many attractions, museums and places to visit, but the most enjoyable in Brussels is getting around and knowing the narrow streets and small restaurants.

Brugge is a city located in northwest Belgium, with just over 110,000 inhabitants. Its official language is Flemish.
Brugge has a medieval architecture like the Hollywood movies. 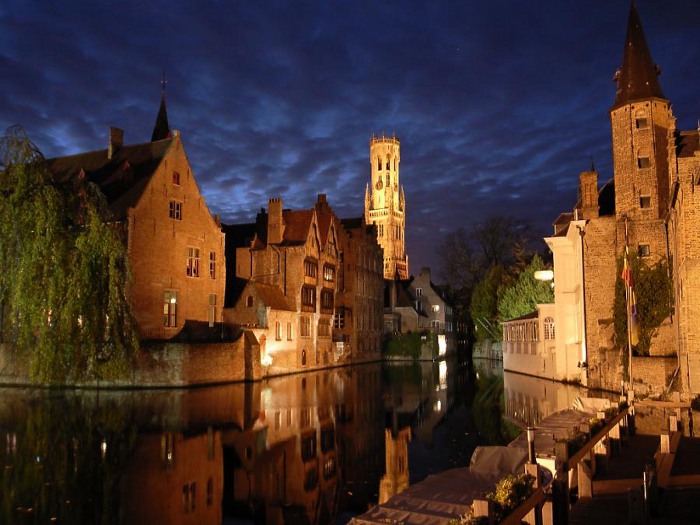 Brugge is known as the “Venice of the north”, due its channels similar to Venice. 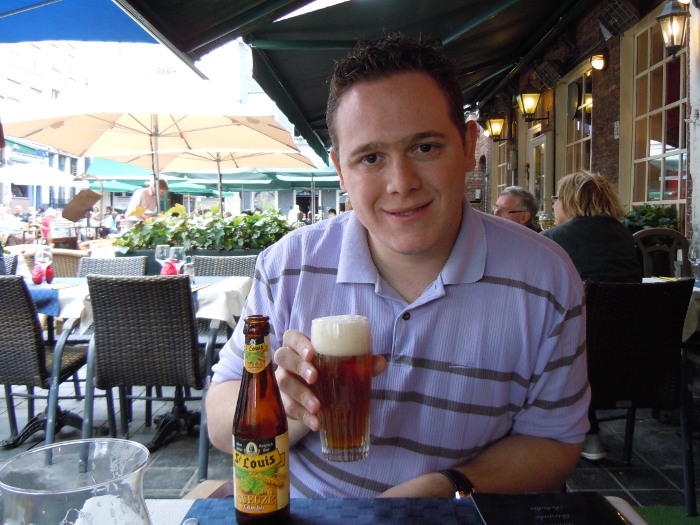 The first Gueuze we never forget! Tasting this wonder for the first time in one of the inumerous restaurants in Brugge.

I commented on another post about the Trappist Westvleteren that there is a shop in Brugge called 2 Be. It is the biggest beer shop I ever seen, look at some pictures here.
Beside this shop, there is a corridor known as “The Beer Wall” and has several brands of Belgian beer.

Here two videos I made there:

Besides being a must have for any good beer lover, at the end of 2 Be has a bar which has a magnificent view of the channel.

Do not expect major tourist stops in Brugge. Instead of being a city with many tourist attractions, the attraction is the city itself, with its medieval atmosphere, nice people and abundant food.
The day we arrived, there was a party where people wear traditional clothes and various types of food served in tents on the street.

This is the kind of thing that draws attention in Brugge, is undoubtedly the most charming city I’ve visited. 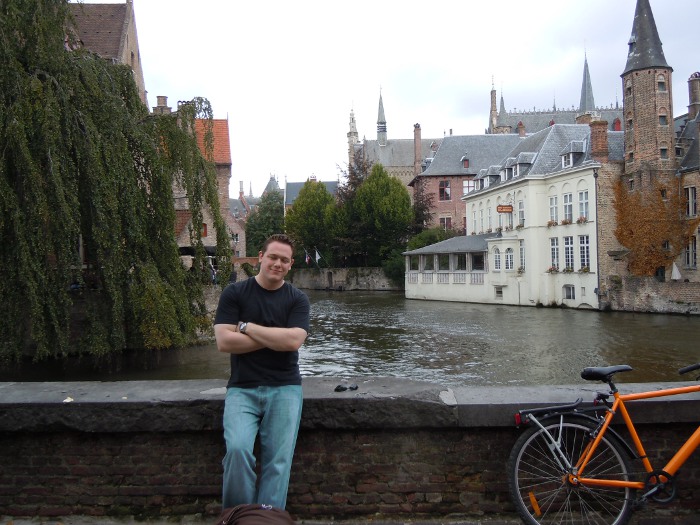 In addition to these cities

In addition to Brussels and Brugge, I visited three other cities: Orval, Chimay and Rochefort. In these last three cities, I took a trappist tour to know the monasteries that brew my beloved beers, but I’ll make a post dedicated to it soon.

I have already spoken and I say again, the most interesting in Brussels and Brugge is to spend all day walking around the city, discovering the narrow streets, bars, restaurants, emporiums with a variety of beers and chocolates you never thought existed, and besides all this have a view of medieval buildings and friendly people who want you to feel good in their country.

Everytime I see the pictures and videos of Belgium, it gives a willingness to quit everything and live a simple life inside that piece of paradise =)